When Seth Warden embarked on his career as a children’s recording artist in the summer of 2011, he was personally filling orders of his first release, “Hi, Hello, How do you do?,” from his home recording studio in Saratoga Springs, NY while still keeping up with his full-time educational job. Due to the success of the song “Pickle Pie,” Seth and his wife Tanika decided to develop a children’s picture book around its lyrical journey. They teamed up with local artist turned illustrator, Kara Kniffen, to create the very first picture book in 2012 under Pickle Pie Productions, LLC.

The process of transforming a song into a book was so much fun they decided to try their hand at “Little Lady Bug” for the release of their second children’s book in early 2013. Seth teamed up with local violinist Doug Moody and percussionist Brian Melick to start performing “Hi, Hello, How Do You Do?,” at local festivals, libraries and community events and soon thereafter the album was on the shelves of two local Barnes and Noble retail stores across the Capital Region.

Seth’s growing popularity in the New York area led to a second CD release in 2014, “Instrumental Lullabies,” geared towards infants and young children and a third book release, “Playful Poems.” Seth is also currently working on a follow up CD to “Hi, Hello, How Do You Do?” In addition to writing and recording music for the band, Seth has combined his music and educational background to develop enrichment and character education programs to bring to local school districts.

Most recently, Seth and Doug filmed for the Food Network in the spring of 2014 for the show Farmhouse Rules and with this national media coverage they landed a spot on tour with Paula Deen Live for the Summer and Fall of 2014. This is an exciting time for Pickle Pie Productions and we hope you will come along for the ride! 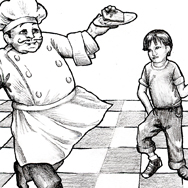